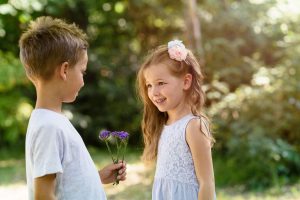 Every one of us must have experienced a crush at a certain time in our lives. It is that strong emotional feeling that one gets when one meets someone who one really likes. Irrespective of whether you presently have a crush right now or not, you must know some facts about crushes. These crush facts would equip you with information you need to have before curshing on anyone.

When we have a crush on someone, we almost instantly develop romantic feelings for them and dream of being together. Most times, they make us anxious but we also can’t stop looking or thinking about them.

Over the years, multiple surveys and studies have been held and it has made us able to come up with 40 psychology facts on crushes that you need to know.

Below are some facts about crushes that you need to know before you crush on anyone.

Without going too deep, a crush is simply an intense feeling of attraction and affection towards someone else after you see them.

According to many studies, most crushes last for around 3 to 4 months which is why most say it is just an infatuation. After this time limit, you are no longer going to have a crush on them.

If after 4 months, you still have strong feelings for your crush, then you are probably in love with the person.

When you have a crush on someone, you tend to just think about the best things you wish for them.

When you have a crush on someone, you think they are truly perfect. It is nearly impossible to notice any flaw in their personalities.

If you have a crush on someone, you’re unlikely to lie to them when they ask you for something. You’re also likely to share unnecessary things with them.

When you are around your crush, you can become clumsy and struggle to do things that you’d do easily if they weren’t there. For example, you can start to stutter when speaking around them.

According to research by scientists, your crushes look 20% more attractive to you than they normally are. Your crush may not be all that you think they are, but it’s okay.

When you pretend to not miss your crush, you’re just deceiving yourself. This has been backed by multiple research that confirm that we always miss our crushes.

According to some scientists, having a crush in our early years plays a crucial part in how our minds mature. It can make us understand processing feelings of desire and love in a way that’ll help us when we’re older.

Over the years, there have been different studies that back up the fact that we have crushes on people who look like our parents. This is simply based on familiarity and nothing else.

When you have a crush on someone, your memories about them last a very long time even if it was not a really intense crush.

How powerful or intense your crush on someone is, depends on how close they are to you. So the crush on a classmate is more powerful than that of a celebrity who you’ve never met.

It is very much possible for you to have a crush on another person even if you’re in a relationship with someone you probably love.

When dealing with your crush or trying to talk to them, you are likely to put it off multiple times before you finally get the strength to speak.

Most people think that having crushes is something teens only deal with but that is false. It is very much possible for you to have a crush on someone at any age after your teenage years.

Although associated with teens, it is very much possible for people as young as 5 or 6 years to have a crush.

It is perfectly normal to mirror the acts and behaviors of things that your crushes do. You may take up an interest in things they do and this is done to be relatable.

Over the years, studies show that if you are speaking in a room when your crush enters, you will get louder so as to draw their attention.

When you see your crush, you’re likely to experience some physical changes like your heart beating faster or the release of epinephrine and norepinephrine in your brain.

When you have a crush on someone, you can’t just escape them as they will draw attention at every moment even if you’re trying to not think of them. For example, you will hear their names, see their friends, and see their cars more often.

If you have a crush on someone for a really long time, it is no longer a crush but now a limerence. This is the state of being obsessively infatuated with someone with a desire for a romantic relationship.

According to a study, we are more likely to have a crush on someone who smiles at us. This is because happy people tend to be considered more attractive.

When a man has a crush on someone, they go about it differently when compared to women. For example, a man will go after eye contact with his crush while a woman will avoid eye contact.

When you are around your crush, your eyes tend to become dilated.

When we are around our crush, we tend to lose focus easily, this can be bad if they are classmates or co-workers.

If we have a crush on someone that we obviously can’t attain, we tend to even have a stronger and more intense feeling for them.

This is pretty common, when someone makes you laugh, you are likely to have a crush on them. Making you see the funny side of things plays a really big factor in how attractive they look to us.

Looks play a part in crushing on someone but that is not it all the time. Sometimes, a familiar smell or certain way of doing things can make you develop a crush on them.

You most likely have similar traits to anyone that you have a crush on. This is backed by the fact that we are attracted to people similar to us.

Studies over the years have shown that we are more likely to have a crush on someone if we also like the same things. This helps to solidify your interest in them.

When you have a crush on someone, you are likely to have romantic dreams about them.

Due to the complex nature of developing a crush, it is nearly impossible to control who we have a crush on. It just happens!

Over the years, studies show that most people tend to have a crush on people with a different eye color. It may be a case of opposites attracting.

When you have a crush on someone, it is really hard to hide it as you find yourself doing things around them that’ll let people know.

When you finally speak to your crush, studies show that you are likely to tell them everything about you even things that are not needed yet.

Studies show that you are likely to have a crush on someone who looks or acts like your ex. This reminds you of someone you’d once loved and been attracted to your ex before y’all got into a relationship.

When we have a crush on someone, our nervous system releases a certain chemical called oxytocin. This is what helps a mother and a newly born child bond. It is quite powerful and when it is no longer released, we can feel moody, frustrated, and even sad for no reason.

Although most people who have a crush on someone think of getting into a romantic relationship with them, sometimes, you can just only admire your crush in a non-romantic way.

We’ve gotten to the end of the list of psychology facts about crush, how many of these crush facts did you know before? Which other crush facts do you know about but was not included in the facts list up above?