The Most Expensive Whiskey. 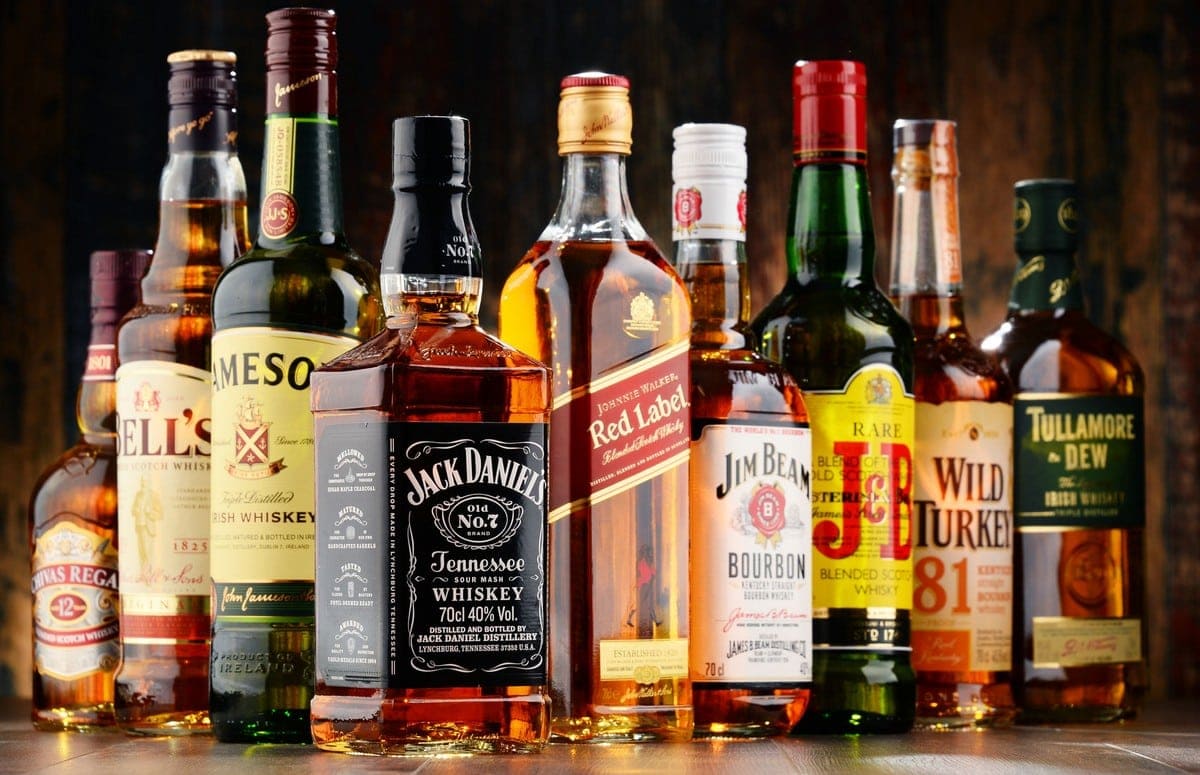 Like we already know whiskeys are alcoholic distilled drink made from the fermented mash of grain. there are various grains (malt), including barley, corn, rye, and wheat which are used for different varieties.

Whiskeys are among the most popular and most consumed alcoholic drinks after rum and beer, they can be pricey too as most of the whiskey brands are high priced, not because of their quality or taste, but because of the bottles, really strange that the price for a bottle of whiskey isn’t high because of the content but rather the container.

The Most Expensive Whiskeys You Could Ever Buy. 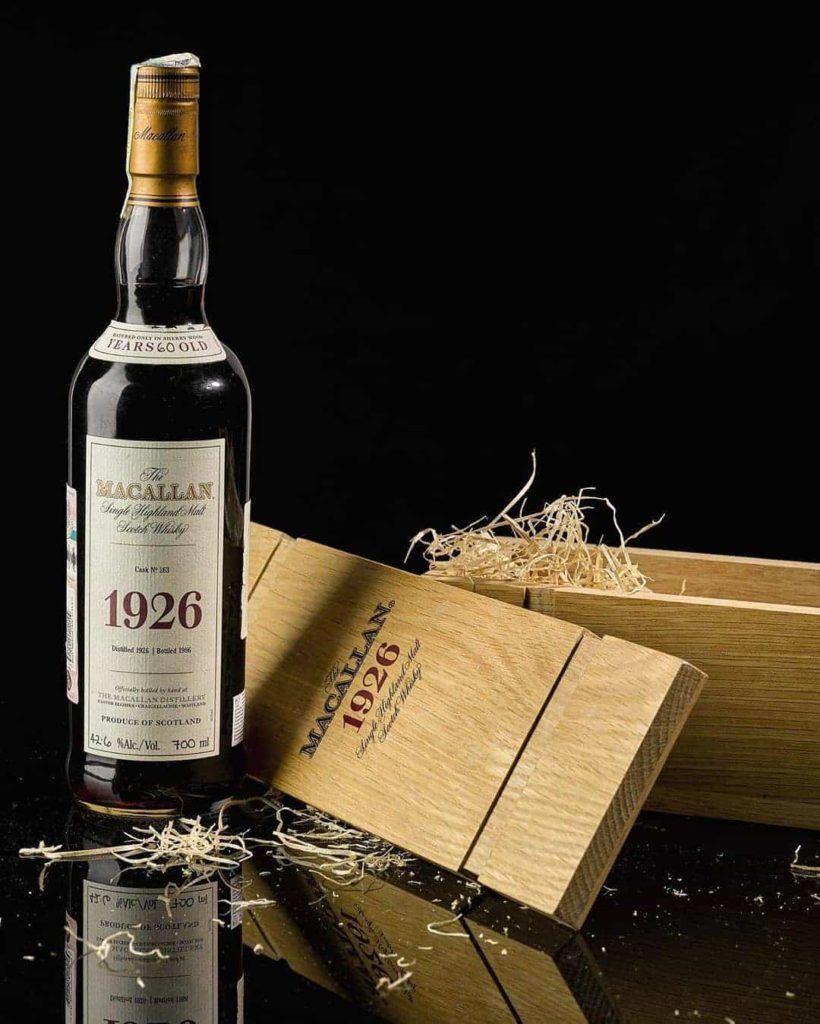 Macallan 1926 was the first distillery release in the Great and Rare range, Macallan 1926 was distilled in 1926 and bottled in 1986, the oldest one in Macallan’s Fine and Rare Collection limited to only 40 bottles.
Every year, a small number of bottles have been released, up to 75,000 US dollars per bottle.

David Robertson describes its taste as,
“From memory, it was an incredibly rich, intense spirit , full of dried fruits, of prunes and dates and tons of incredible spicy notes of cloves, ginger, and cinnamon. I also recall zesty orange marmalade, hints of peat and smoke, finished with a delicious drying oak tannin from the sherry cask, and waxy, linseed oil and leather notes.” 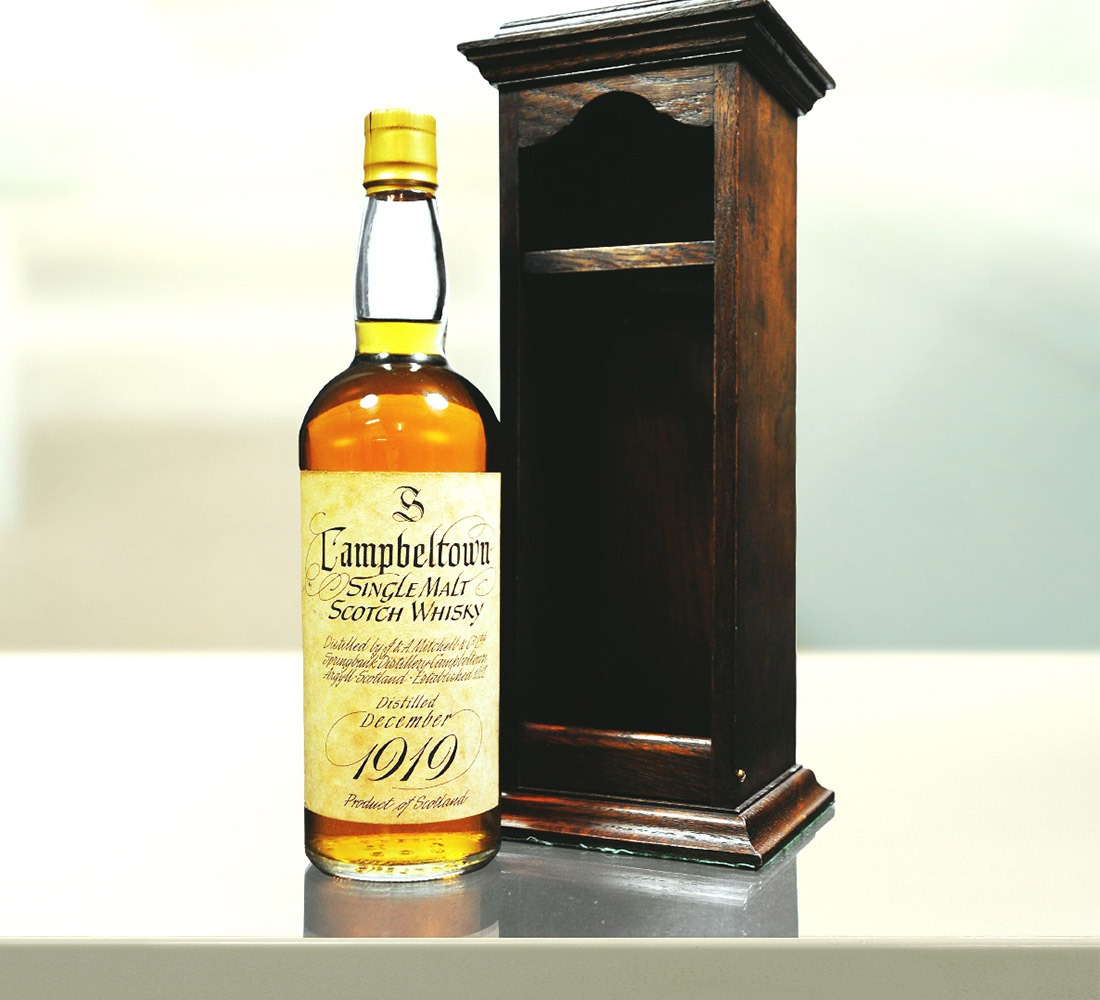 The Springbank 1919 is one of the few whiskey bottles that are aged over 50 years. They could be purchase online. You will find it more at the costly whiskey auctions, and you probably won’t have the chance to see it at the expensive wines stores of your area. The Springbank 1919 was  once listed as the most expensive whiskey in the Guinness Book of Records.
It’s actually one of the most popular whiskey bottles in the world until today. This old distillery drink was bottled in 1970 and is part of the 1919 vintage series. It is also a limited edition product since only 24 bottles were released. 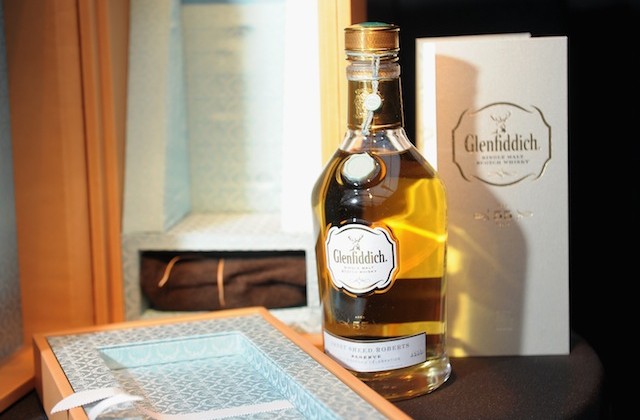 The label was from the name Janet Sheed, the granddaughter of Glenfiddich founder William Grant who lived till at the age of 110 and Only 11 bottles of Glenfiddich Janet Sheed were made at the time when she died in 2012, Sheed was the oldest woman in Scotland.
Glenfiddich Janet Sheed Roberts Reserve 1955 is a combination with a pleasant flavor, woody oak, and hints of heather, hay pear with notes of spice. The light and smoothing Scotch whiskey with a note of cured meat and has a delicate aromatic nutmeg finish.


Taste
It is described as having a heavenly flavor of barley, pear, and heather. Its pale gold, with the hue of autumn barley in color. And in terms of notes, it has light and delicate with soft-orange flavors and delicate violets, with roasted almonds and the smoothest whiff, and sweetness with a few drops of water. A Creamy vanilla with a soft smokiness and some sweeter oak notes are beautifully balanced. 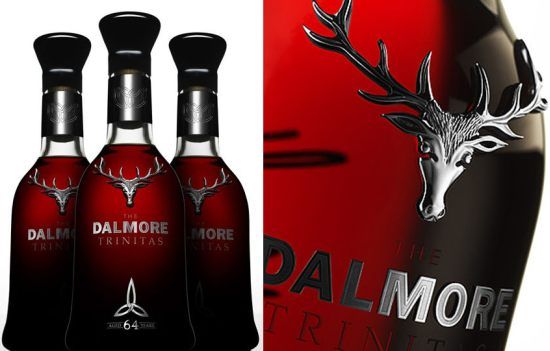 Only three bottles of Dalmore 64 Trinitas were made, Only one for direct sale is available and no reference to what happened to the two others.
However, the Dalmore 64 Trinitas bottles are more likely to sell much higher than their original purchase price, after it finally appears at the auction.

Taste
The 64 Trinitas’ notes are a glorious fusion of grapefruit, sandalwood, white musk, and Indonesian patchouli follows powerful notes of sweet raisins, rich Colombian coffee, crushed walnuts, and bitter orange.
It has a hint of mangoes, figs, caramel apples, roasted coffee, treacle toffee, marzipan, and soft licorice after you sip it for the first time. 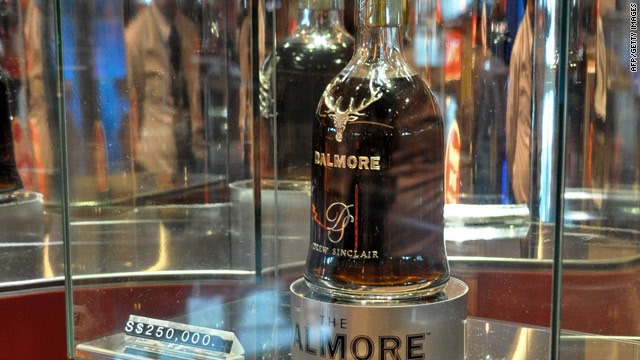 The decanter is made up of beautiful platinum and special crystal and took 100 hours to be handcrafted, and its quarter-million dollars. 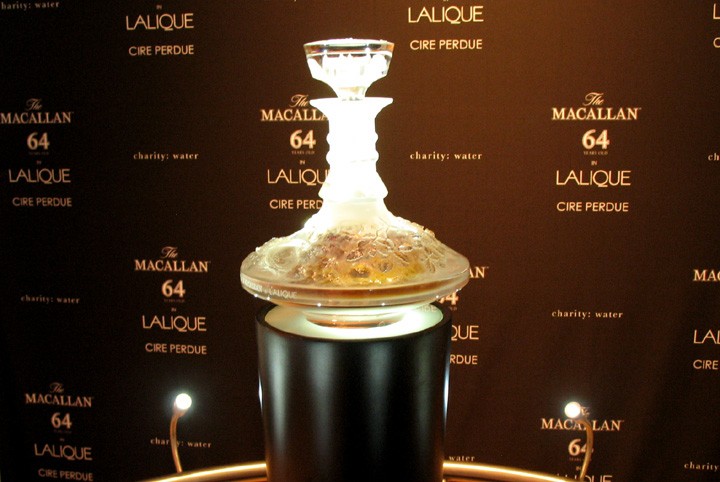 The Macallan 64 is one of the whiskey brands Speyside distillery that have a high price for its use of valued decanters. Macallan 64 was last seen at the 2010 auction sold for $464,000.
The quality of premium old whiskey was obtained by the blend of three by aging in Spanish oak casks from 1946, 1945, and 1942.
The brand was able to register in the Guinness Book of World Records and also donated the earnings to Charity: Water, a clean water organization. 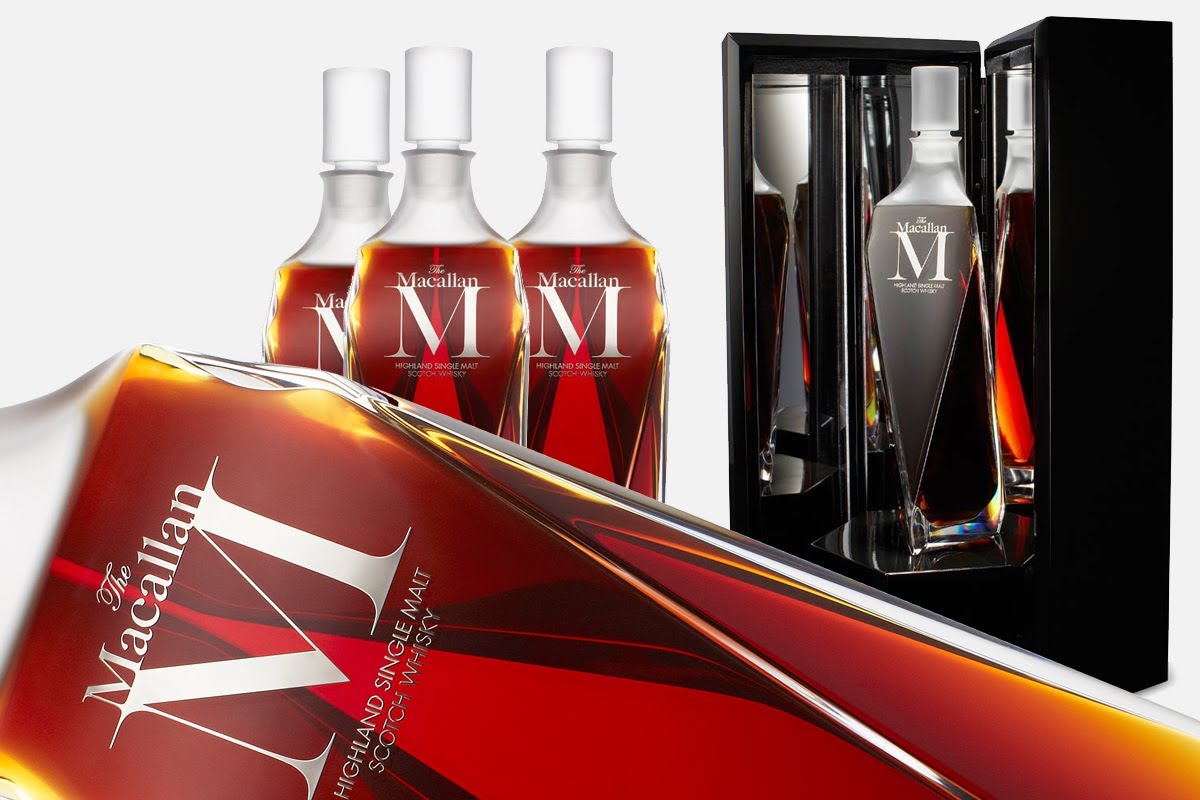 The Macallan M is the old and rare king of whiskeys that are stored in special cases like Macallan 18 sherry cask made from Spanish oak.
The decanter is made of handcrafted crystal that has been crafted and developed by a team of 17 craftsmen.
The Last known Macallan M was sold at a Hong Kong auction had an ABV of around 44.7%.
You might wonder what makes it so special to Macallan M that someone paid $628,205?
Most whiskey experts agree that the Macallan M is an exceptional product, as it can contain its quality in such a bottle, a decadent, gazing decanter of the crystal of nearly six liters capacity.


Taste
The M edition has fruity overtones, including the delicate flavor of leather violet, apple cedar, and lemon enriched with the raisin.
According to the distillery, “vanilla accompanies green apple hand in hand, neither taking the lead. Ginger, nutmeg, and cinnamon create an ensemble in the background, with polished oak offering to overstate, yet never does, but plays with a depth of resinous, juicy oranges, before the heavier raisin and sultana flavors take over, meandering to a long full finish.” 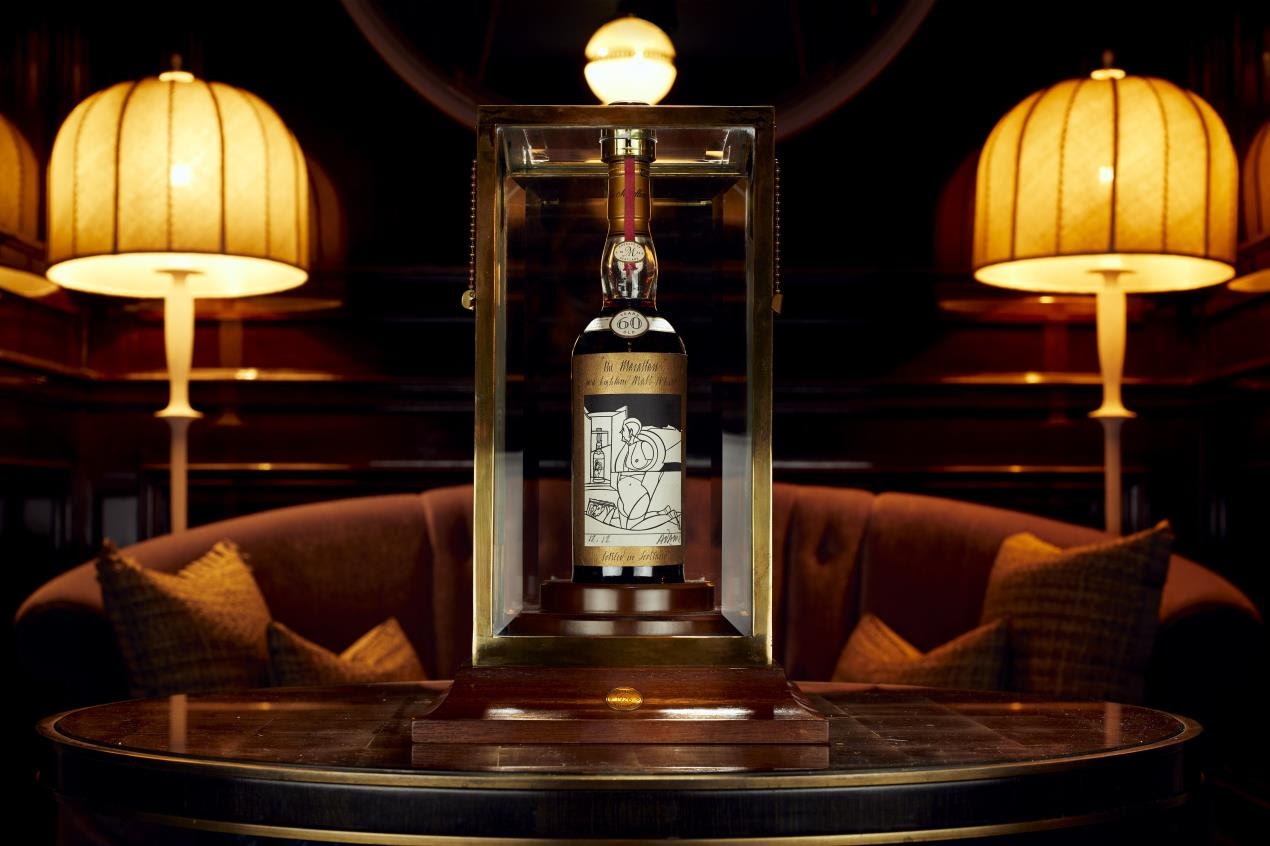 data-preserver-spaces=”true”>October 3rd 2018, a 60-year-old scotch, was sold for 1.05 million USD at Bonhams Whisky Sale in Edinburgh, Scotland, which was, one of the rare distilleries symbols.
The price was incredible but in May, a similar-release bottle was sold for just over $1 million at another Bonhams auction in Hong Kong to set a new world record for the most expensive whiskey ever sold.

Macallan bottled it in 1986 and commissioned Peter Blake and Valerio Adami to design the limited-edition labels-12 Adami labels and 12 Blake labels. There are only twelve Macallan Valerio Adami 1926 bottles that were made, and the number that remains in the world is unknown.

Taste
Christie’s international head of wine, Tim Triptree,
“Obviously, after spending 60 years in cask it’s going to be quite dark in color  amber, a bit of mahogany in there. And then you’ll get some of the spices from the wood, little hints of vanilla, potentially some nutty characteristics, cinnamon, Christmas cake”…. 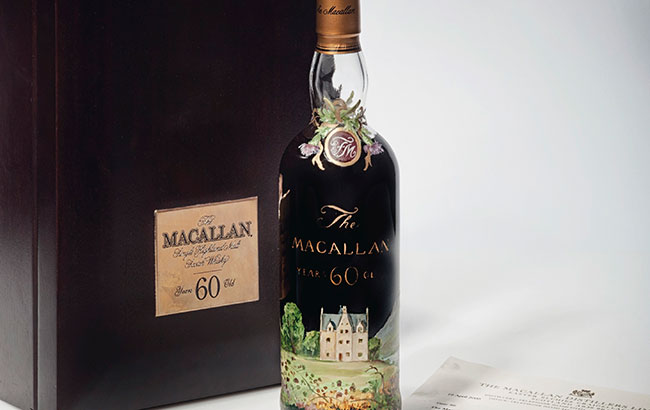 This 60-year-old Macallan was sold for $1.5 million, breaking the most recent records of the most expensive bottle of whiskey ever.
Was sold on 29th November 2018 at Finest & Rarest Wine Spirits Christie auction in London.
60 year old Macallan 1926 belonged to the 24-bottles limited edition series.
Along with Valerio Adami & Macallan estate reserve 1824, we cannot find this super rare whiskey at ordinary auctions.
Valerio Adami did designed half while remaining was completed by the other Peter Blake.

Taste
David Robertson, is among the few who tried this and in his estimation.
“When I tasted it, the whiskey was quite intense, dry, and tasted of fruit with some hint of warming spice. But I had to try a lot of whiskeys over the years and in my humble opinion, there was a number that was better than this one.” 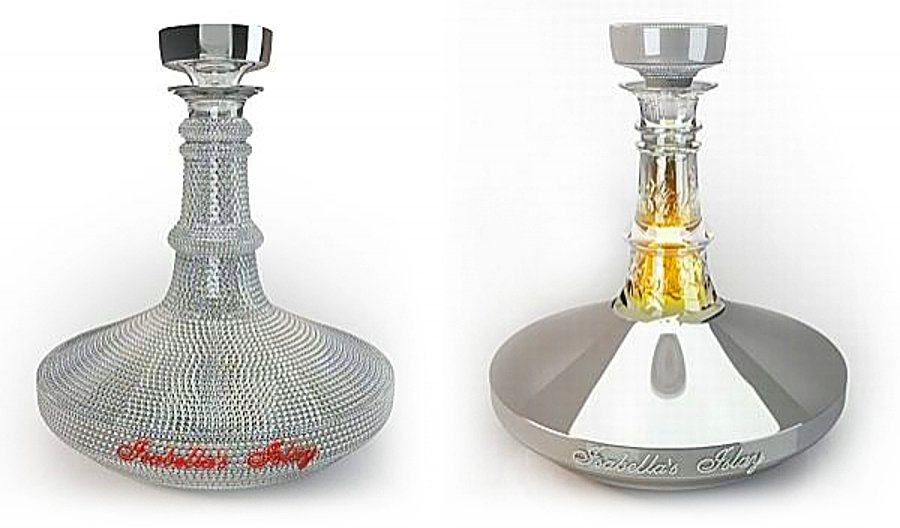 Isabella’s Islay is the most expensive whiskey in the world, has an estimated price tag of US$6.2 million.
The name is gotten from its place of origin, the island of Islay. The brand also lets you customize and select the diamond-studded name on the bottle.
The Brand makes it of rare ingredients and high-quality grains, Islay Scotch Whiskey is a 30-year-old, aged single malt scotch, It has the most valuable and costly whiskey, as rare as it can be for a drink.
The Islay value is all tied into its decanter, containing 8,500 diamonds, 300 rubies, and exquisite white gold. The bottle alone is worth moreover $6 million. This makes it the world’s most expensive bottle for a beverage ever used.
Isabella is the ultimate expression of the luxury scotch whiskeys, and it costs a ton of money on its own, even without its diamond and jewel-encrusted bottle.

FAQ About Most Expensive Whiskey

Isabella’s Islay is the most expensive whiskey in the world, costing about $6.2 million.

The expensive whiskey is the Isabella’s Islay.

The rarest whiskey in the world is the Macallan 1926.

The rarest whiskey is the Macallan 1926.

In no order the top 5 whiskeys in America are

Crown Royal makes sure there’s a bottle for everyone and on every budget. So, Yes Crown Royal is a top shelf whiskey.

That depends on a few things, it is safe to drink a 40 year old whiskey if it’s completely sealed through out this period. 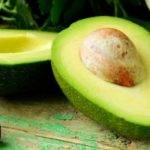 Facts About Avocado You Do Not Know